If I were a Woolworth's department I'd be Pick and Mix. If I were a kind of meal - I'd be a buffet. If I were a piece of pond life (!) - I'd be one of those insects that hovers over the surface with just their toes clinging on for dear life. You see my mind is full of interesting, but fairly useless and superficial pieces of information, which do me no favours, unless you wanted me on your pub quiz team or as your "phone a friend". I could do Mastermind, but only the general knowledge bit, my specialist subject would have to be "things you didn't know you would find interesting, that won't ever help you in life but might fool people into thinking you were a knowledgable person as long as they don't actually talk to you for too long".

Let me explain. During the course of a normal working week (which by all accounts is usually about 14 hours a day, 7 days a week) I come into contact with lots of people buying books upon their given area of interest. Being a naturally nosey person, or as it would say on my cv if I had one (and I hope I never do) - "a people person", I tend to fall into conversation about that which they know lots and I know nothing. Sponge-like, my brain then absorbs these little gems for me to call upon randomly when I'm watching University Challenge (I quite like the idea of being Queens College, Cambridge to Tony's Kingston Polytechnic).

So for example this week I learnt that Brian Cook who did the famous watercolour dustwrappers for Batsford publishers (including the Little Guides) was actually Sir Brian Caldwell Cook Batsford (1910-1991) who as well as running the family firm, became a Conservative Member of Parliament for Ealing South from 1958 to 1974 but strangely there is no entry on him in the Oxford Dictionary of National Biography.

On telling another customer that I am to domestic chores what Delia Smith is to brain-surgery he pointed out to me that it's ok just to be brilliantly outrageous (obviously this is the aura I portray), after all George Sand (the French novellist who scandalised society by dressing as a man and smoking huge cigars in public) made Chopin miserable by cooking him soggy toast. Tony nodded his head sagely when I passed on that gem.

I know that Sir Walter Scott deplored the belief in demonology and witchcraft, and James I was certain of their reality. And whilst we're on the subject of James I - in Isaac Disraeli's "Curiosities of Literature" there's an article which says:- "It was usual, in the reign of James the First, when they compared it with the preceding glorious one, to distinguish him with the title Queen James, and his illustrious predecessor by that of King Elizabeth!"

One of my customers explained to me that in old maths text books that different editors put different slants on the same material, that some editors were far more easy to follow than others and also yes, standards in maths are much less rigorous now then when he was a boy.

Everyone knows Quentin Crisps attitude towards dust, but I know that Quentin Crisp once said (on American TV) that his only ambition had always been to be a chronic invalid. Another customer told me that you should never watch a dubbed Ava Gardner movie becuase she had one of the most distinctive voices in movie history (sexy, very feminine and whispery), and another, that whilst other writers may - Shakespeare never, ever disappoints.

I may not know much, but there's definitely enough stuffed in my grey cells to make me an interesting party guest. Vol au Vent anyone?
Posted by Sara at 10:37 am No comments: 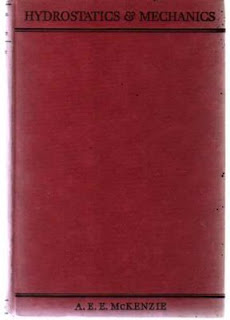 It's a momentous day. Today, Monday 1st December 2008 is the day we reached our target of 20,000 books online. It's taken six years and its been a long, hard slog , but it's the only business plan we've ever had. To get there we have had to enter 38,000 books and sold 18,000 of them. Many, many times I have thought we were never going to do it, but we have. What an achievement. I am a very happy bunny.
Book No. 20,000 online was this one Hydrostatics and Mechanics - how fascinating does that sound? ;)
No sooner did we have 20,000 online than we sold four books in one fell swoop and had to rush to get back there all over again, but no matter. I am now officially allowed to get a life, go out in the daytime, enjoy myself and stop working so bloody hard.
Glory, Glory Hallelujah! I am in bookseller heaven.
Posted by Sara at 5:51 pm No comments: